Julie spent 10 years working in the transportation industry during this time.  Nine years with the Arizona Department of Transportation (ADOT) as the District Environmental Coordinator (DEC) for the Kingman District from 2006 to 2015, and 1 year with the Hualapai Tribe as their Transportation Planner from 2015 to 2016.

Prior to 2006 she was the Biological Department Lead for HDR Engineering, Inc. in San Diego, CA (2005 to 2006); President and Co-owner of Ecological Ventures California, Inc. in San Diego, CA (1996 to 2006); Associate Environmental Specialist for The Metropolitan Water District of Southern California (1991 to 1996); Biological Technician for EG&G Energy Measurements at the Nevada Test Site (1990); and Administrative Specialist while serving in the U.S. Army and the U.S. Army Reserve (1982 through 1987).

She obtained her Bachelor of Science Degree in Wildlife Biology from Colorado State University in 1990.

Additional details regarding Ms. Alpert’s qualifications and experiences are found within Willow Creek’s Statement of Qualifications which is available upon request.

The following are just a highlight of the many projects that Julie participated in between 2006 and 2016:

Willow Creek Riparian Preserve management since 2008.  Activities have included wildlife surveys for birds, reptiles, amphibians, and mammals, and monitoring changes in the habitats.  Small mammal trapping continues to be conducted and results will be compiled for potential publishing to highlight the changes in density, abundance, and species as the Preserve habitats continue to change and mature since the inception of exclusion fencing in 2008.

Bob and Julie prepared and Julie presented 12+ years of data collection and trends at the Preserve at the following professional scientific conferences.  Power Point presentations are available under the Willow Creek Riparian Preserve tab.

51st Joint Annual Meeting of the Arizona and New Mexico Chapters of The Wildlife Society in Flagstaff, AZ in February 2018. 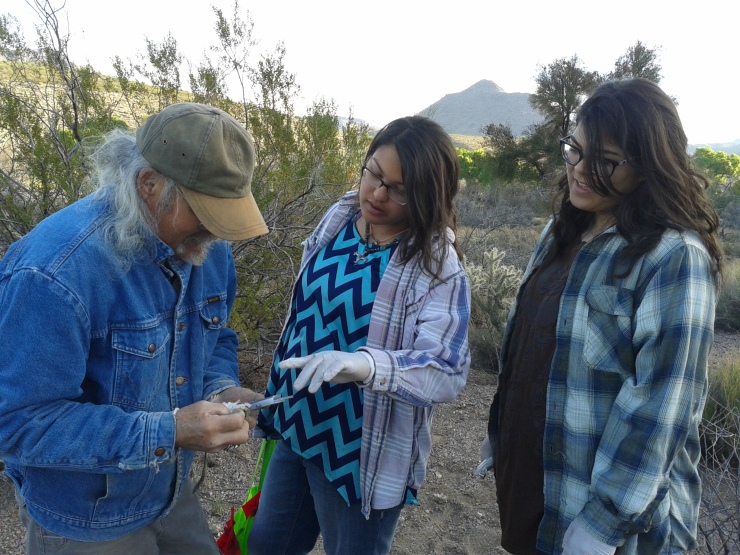 Bob demonstrating how to measure a kangaroo rat to student volunteers

A man of many talents, Bob also served the San Diego community as a Physician’s Assistant working in various Emergency Rooms between 1976 and 1989.  His medical profession began in the military as a U.S. Navy Battalion Surgeon in 1972 and he was later assigned to the 3rd Force Marine Recon Unit between 1973 and 1975 in Cambodia.  Bob is a disabled Vietnam-era veteran.

He obtained his Bachelor of Science in Wildlife Ecology from San Diego State University in 1981.

Additional details regarding Mr. Faught’s qualifications and experiences are found within Willow Creek’s Statement of Qualifications which is available upon request.